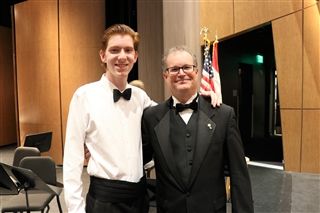 1/29/2020
Country Day becomes the annual host for District Honor Band!
An opportunity for Middle and Upper School students to shine. An opportunity to work for 15-straight hours to play on stage for only 20 minutes. An opportunity for other private schools in Miami and public schools in the Florida Keys to come together once a year. This is what District Honor Band has become. Country Day is honored to be the new host for this annual event.
Honor Band was created in 2006 as an alternative to the Florida Band Association (FBA) as a way to support smaller schools that do not have large-scale band programs. With the annual FBA competition, only one student from each school can be nominated to perform. Honor Band allows for each participating school to nominate up to 10 students. Not every student nominated receives a spot, but in Honor Band, the odds are greater. Students who are chosen and accept the nomination put in extra practice hours. Country Day Middle School students who performed in this year’s Honor Band practiced on average 15 hours leading up to the performance.
Russell Mofsky, Middle School Music teacher, is the Honor Band logistics. He believes hosting the annual performance establishes Miami Country Day School as an organization interested in being a part of a strong music program. Other schools have the opportunity to visit our campus, see our facilities, and interact with Country Day students. Ellie, Sofia, and Lola, our three Middle School students who performed this year, said they enjoyed being able to interact with other schools. Russell Mofsky agreed, stating that Honor Band is “a great opportunity for all the students. There is no greater joy than seeing all your students get to interact with other students from other schools”.
Honor Band has become something larger than the music. It has become a learning opportunity for our students to meet and play with students from other schools. This year’s performance showcased 5 Country Day students: Ellie, Sofia, and Lola from the Middle School, and Mack and Michael from the Upper School. All 5 Country Day students put in many hours of work to pull off an outstanding performance.
Thank you to every faculty and staff member who assisted with this year’s Honor Band performance. Congratulations to all the students!
Back