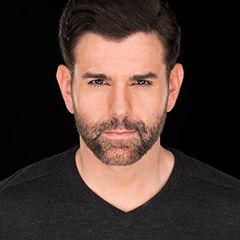 The Miami Herald has described Nicholas Richberg as,

“Mesmerizing… quietly magnetic…simply, superb…utterly convincing, complex and always compelling.”
The Miami New Times has written he towers in bravura performances, and has named him Best Actor in Miami for stage work ranging from Shakespeare, to Pinter, to Sondheim.

A sought after actor, singer, director and producer, Nicholas has appeared in film, television, radio, and headlined venues across the country and on the high seas. Off stage he serves as Managing Director of Zoetic Stage, an award-winning, nationally recognized professional theater that makes its home at the Adrienne Arsht Center. At Zoetic, he has starred most recently in critically acclaimed productions of Harold Pinter’s The Caretaker and Betrayal, and Stephen Sondheim’s Passion and Assassins. Nicholas also appeared in last season’s lauded production of 1776 at Palm Beach Dramaworks, where he will star later this year as Tennessee Williams in the world premiere drama Billy and Me by Terry Teachout.

Nicholas is a seven-time Carbonell Award nominee, three-time Silver Palm Award recipient, and recipient of the Best Actor Carbonell Award for his critically acclaimed performance in the regional premiere of Peter and the Starcatcher at the Adrienne Arsht Center. Florida Theater On Stage called his performance, “one of the best demented, daffy, comic scene-stealing performances seen in South Florida in many, many seasons.”

Nicholas is a graduate of University of Miami and Miami Country Day School.
Back