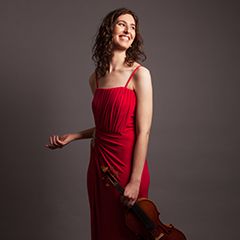 Praised for her “sensitivity and thoughtful musicianship,” Cuban-American violinist, Jacqueline Jove, leads a versatile life as a performer and music educator. Since her concerto debut at age 14, she has appeared as a guest soloist for the German, Italian, and Israeli embassies and continues to perform as a soloist and chamber musi­cian in concert venues across the globe.
Ms. Jove has appeared as a guest solo­ist with the Interlochen Concert Orchestra and, last season, on a twelve concert solo tour in Brazil. This season, Ms. Jove will appear in recital and lecture recital series across the United States and as a guest artist at NEOJIBA in Bahia, Brazil. She has been presented in recitals and chamber music concerts at venues including Merkin Hall, The Town Hall, Puffin Cultural Center, and The School for Strings, and on series including the Carolina Chamber Music Festival, Turtle Bay Artist Recital Series, Turtle Bay Lecture Recital Series, Listen Closely, Concerts on the Slope, and Music Movement/Moving Music.
A passionate advocate for the arts, Ms. Jove was selected by the Orchestra of the Americas as a 2016-17 Global Leader. In partnership with the Fulbright Association, University of Oxford, and McGill University, she travelled throughout the Americas as a guest teacher, performer, and consultant and completed professional certification in musical leadership, teaching artistry, and social entrepreneurship.
In demand as an educator, Ms. Jove serves as the Director of Education for the Sphinx Organization, whose mission is to transform lives through the power of diversity in the arts. In this role, she over­sees the Sphinx Performance Academy, in partnership with the Cleveland Institute of Music and Roosevelt University, as well as twelve in-school violin programs through­out Flint at Detroit. She previously served on the violin faculty of the Lucy Moses School at the Kaufman Music Center and the Chapin School in New York City, and in past summers at Interlochen Center for the Arts. An experienced Teaching Artist and clinician, she served for many years as a faculty mentor for Harmony Program, an educational outreach program modeled on El Sistema, and was instrumental in the development of the Harmony Program All Stars, a mentorship program with the New York Philharmonic. Ms. Jove was selected to participate in Lincoln Center Education’s Summer Forum for Teaching Artists and completed the Teacher Training Program at the School for Strings in New York City.
An avid chamber and orchestral musician, Ms. Jove served as a fellow at the Opéra Bastille in Paris and at the Dutch Orchestra and Ensemble Academy. She was the 2014 Alberta Bergh Gamble Scholar at the Pierre Monteux School, where she also served as concertmaster, and has attended orchestral and chamber music festivals including the National Orchestral Institute, Tanglewood Music Center, Manchester Music Festival, Le Domaine Forget, Beethoven Institute, and California Summer Music.

Ms. Jove has appeared on the radio for France Culture’s Un Poco Agitato as a featured guest, discussing and performing Beethoven’s violin sonatas. As a member of the Yale Collegium, she took part in the Naxos recording of the Mendels­sohn and Bach Magnifacts, led by Simon Carrington. She also participated in the recording of Raphaël Lucas’s Confession for Albany Records, which won First Prize in the National Opera Association Chamber Opera Award for 2011-12. She is featured on the soundtracks of Michael Morgenstern’s short film, Lily in the Grinder (2014) and of the upcoming movie The Bohemians, under the direction of Alvaro Domingo. She received a Kenneth Cornell Foundation Research Grant to pursue studies at the Institut de Rechercheet Coordination Acoustique/Musique
(IRCAM) in Paris, resulting in her essay, “The New Novel and New Music: a Study of Alain Robbe-Grillet and Heiner Goebbels through La Jalousie and La Reprise.”
Ms. Jove holds a Bachelor of Arts degree, cum laude, with Distinction from Yale University. After studying at the Yale School of Music and the Paris Conservatory, she completed her Master of Music degree in violin performance as a scholarship student at SUNY Purchase, where she served as a teaching assistant. www.jacquelinejove.com
Back