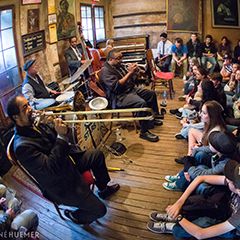 New Orleans’ Preservation Hall was established in 1961 to honor one of America’s truest art forms – Traditional New Orleans Jazz. Operating as a venue, a touring band, and a non-profit organization, Preservation Hall continues its mission today as a cornerstone of  New Orleans music and culture.
The Preservation All Stars are the premiere ensemble of the most tenured artists from the greater Preservation Hall musical collective. Each performer bears a unique connection to the earliest practitioners of jazz itself, some by bloodline but all united by the sheer power of tradition. In addition to performing at the Hall weekly and internationally throughout the year, these culture bearer’s generation through education and music outreach.
The Preservation Hall Foundation was launched in 2011 to protect, preserve and perpetuate the musical traditions and heritage of New Orleans. Through music education, outreach, academic research, archiving, multimedia projects, and collaborations, the Preservation Hall Foundation creates greater awareness and appreciation for New Orleans music and the communities that support it.
Back